Despite being a member of the hyena family, aardwolves differ in many ways – one of them being their diet of termites.

Physical Description
Like all members of the hyaenidae, aardwolves have longer front legs than the hind legs. The down-sloping body is accentuated by the crest-like back mane, which is most prominent on the neck and shoulders. Aardwolves can erect this crest if frightened or aggressive to make themselves appear larger. They have long yellow-white fur, which is paler on the throat and underparts. Vertical stripes run down the sides and diagonal stripes run across the fore- and hind-quarters. 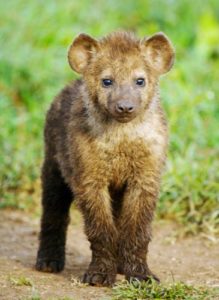 Diet
Unlike their close relatives, the hyenas, aardwolves are insectivores. The larger part of their diet is made up of termites (in particular, snouted harvester termites), although they also feed on maggots, grubs and other soft-bodied invertebrates. They will also very occasionally take small mammals, birds and carrion. Unlike most termite-feeding mammals, aardwolves do not dig into the nest, instead they simply lick up their prey. They may consume up to 200,000 snouted harvester termites in one night. Aardwolves lack the strong teeth and jaws exhibited by hyenas, the molars are small pegs – as an adaptation to their insect diet.

Behaviour
Aardwolves are solitary and nocturnal, and rest in burrows during the day. They are monogamous and each pair shares a territory of 1-4 square kilometres (the greater the availability of termites, the larger the territory). Despite the appearance of monogamy, during the breeding season, neighbouring males may sneak a mating with other females.

Reproduction
2-4 cubs are born after a gestation period of 90 days. Males protect the cubs during the day while the female forages. They emerge from the den when they are 6-8 weeks old, and after 9-11 weeks, they forage with their mother. They are weaned after 16 weeks.

Conservation status
Aardwolves are not listed on the IUCN Red List 2000.