The Amazon River Dolphin is the largest of the worlds five freshwater dolphin species. It relies on echolocation to find prey in the muddy rivers that it inhabits.

Subspecies of The Amazon River Dolphin 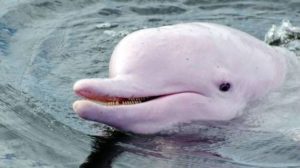 Statistics of The Amazon River Dolphin 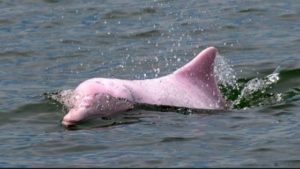 Distribution of The Amazon River Dolphin

Habitat of The Amazon River Dolphin

They are most often found in brown, slow-moving waters, but during the flood season they enter flooded grasslands and forests.

Diet of The Amazon River Dolphin

They feed on fish and crustaceans.

Behavior of The Amazon River Dolphin

These dolphins live singly or in pairs, but groups of up to 30 gather to feed. They use their triangular pectoral fins to swim slowly over the river bed searching for crabs, fish and turtles with their echolocation. There are reports that Amazon river dolphins can stun prey with bursts of sound from the “melon” organ in their bulging forehead.

Reproduction of The Amazon River Dolphin

Amazon river dolphins breed in late October to early November. Young are born between May and July when the water is at its highest and much of the lowland forest is flooded.

In 2008, this species was ranked by the International Union for Conservation of Nature (IUCN) as a Data Deficient, due to the uncertainty regarding their population trends and the impact of threats. While hunting is a major threat, in recent decades, greater impacts on population are due to the loss of habitat and inadvertent entanglement in fishing lines.

Courtship of The Amazon River Dolphin

Adult males have been observed carrying objects in their mouths such as branches or other floating vegetation, or balls of hardened clay. The males appear to carry these objects as a socio-sexual display which is part of their mating system. The behavior is “triggered by an unusually large number of adult males and/or adult females in a group, or perhaps it attracts such into the group. A plausible explanation of the results is that object carrying is aimed at females and is stimulated by the number of females in the group, while aggression is aimed at other adult males and is stimulated by object carrying in the group.” Before determining that the species had an evident sexual dimorphism, it was postulated that the river dolphins were monogamous. Later, it was shown that males were larger than females and are documented wielding an aggressive sexual behavior in the wild and in captivity. Males often have a significant degree of damage in the dorsal, caudal, and pectoral fins, as well as the blowhole, due to bites and abrasions. They also commonly have numerous secondary teeth-raking scars. This suggests fierce competition for access to females, with a polygynous mating system, though polyandry and promiscuity cannot be excluded.

In captivity, courtship and mating foreplay have been documented. The male takes the initiative by nibbling the fins of the female, but reacts aggressively if the female is not receptive. A high frequency of copulations in a couple was observed; they used three different positions: contacting the womb at right angles, lying head to head, or head to tail