Are fish colorblind? This is a question that has prompted arguments among fishermen, scientists and those that are just curious, and there is a definite answer….kind of.

You Can’t Ask a Fish if it See Color

Scientists cannot distinguish through study what images reach a fish’s brain. Most of the studies done regarding vision in fish are done by physical examination or through chemical exposure and examination of different parts of fish’s eyes. Study techniques have also included trying to determine how fish respond to images or stimuli in the laboratory. Many different species of fish have different vision abilities, and results in the laboratory may not be representative of what happens to fish in actual fresh bodies of water or in the ocean. Studies were done on the retinas and the eyes of fish indicate that the majority of fish can focus clearly on images, can detect motion, and have a good ability to detect contrast. 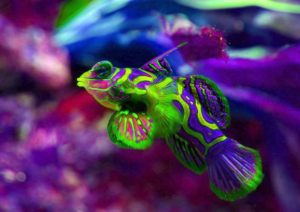 Fish have two sensory cells, rods and cones, in their retina. In fish, as in humans, rods are sensitive to low light levels. This means that fish that actively swim at early dawn and in the evening have fewer cones and more rods. Nocturnal fish like deep sea creatures have only rods. Rods are sensitive to deep-penetrating short-wavelength light which allows vision in the water column where little light is available.

Cones and Rods Vary from Fish to Fish

In the eyes of fish, there are four different cone pigments, and each of them is sensitive to different wavelengths of light. Some fish may also have two to three different types of cones depending on their habitat. Shallow water fish generally have three cones types, red, blue, and green. This allows them to see the wide spectrum range of shallow waters. Fish that live at moderate water depths have cone pigments that are sensitive to the colors blue and green. Deep-sea fish have only rods, which makes them sensitive to the short wavelength light that is able to penetrate deeper waters. Shallow water fish see more color ranges because the entire visible color wavelengths have not yet been absorbed by the water in the way that deep-water color wavelengths are.

Trout and Salmon Can See Color 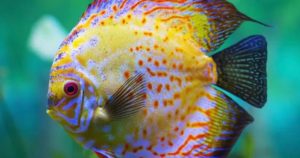 Human eyes and fish eyes are similar to those of all other vertebrate animals. Fish have cones and rods just as humans do. Scientific studies have revealed that Pacific Salmon and Rainbow Trout are able to see colors similarly to humans. But there are fish that probably can’t see color because of the lack of cones.

Scientists conducted a study on the vision of sharks using a technique called microspectrophotometry in order to identify cone pigments in shark retinas. The study uncovered data revealing that sharks have one type of cone cells in their eyes which suggests that they are color blind. The study also shows that while sharks’ eyes are effective over a large number levels of light, in reality, they have only one long-wavelength-sensitive cone in the retina, which makes them almost completely colorblind.

Sharks have remained successful predators throughout the evolutionary process. A reason for this is most probably that they have a wide-ranging system of sensory characteristics, and vision is one of them.

Color Blindness Depends on the Species of Fish

Are fish colorblind? Simply saying, if a fish has the right amount of cones in their eyes they 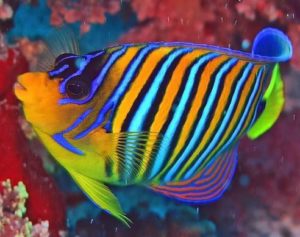 can see color. Salmon and sharks have different cones. In humans they’re called the S-cones, M-cones, and L-cones, and are named for what wavelength of light triggers them. The sensitivity of these cells to light tells us what wavelengths of the EM spectrum we can see.

Absence of specific cones results in different types of colorblindness, both in humans and other animals. Basically, colorblindedness isn’t actually a dichotomy between “sees color” and “sees in black in white” but has a bunch of different variation. Dogs only have two types of cones, which we know makes them red-green colorblind. This means it’s difficult for them to distinguish between red and green. The same is true for fish.