The polar bear (Ursus maritimus) is the largest bear species. A male polar bear can measure up to 10 feet long and weigh 1,500 lbs., which is about the weight of eight human adults.

Female polar bears are up to 50% smaller than the males.

Polar bears are the only bear species that is a marine mammal. 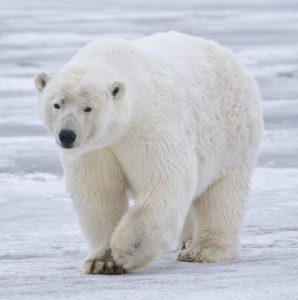 Only the polar bear is a true carnivore. All other bears are omnivores, or animals that eat both plants and meat.

Under their fur, polar bears have black skin.

If you eat a polar bear liver, you’ll die. Humans can’t handle that much vitamin A. 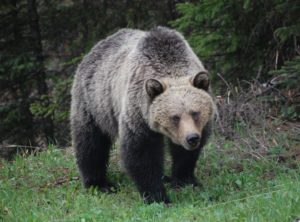 Brown bears live as long as 30 years in the wild. One captive brown bear lived to the age of 47.

Grizzly bears have a bite-force of over 8,000,000 pascals, enough to crush a bowling ball.

The Brown bear is the national animal of Finland.

The Brown bear’s weight varies widely throughout the course of the year. Some can even double their weigh between emerging from their dens in the Spring and returning in the Fall.

In India, brown bears can be reddish with silver tips, while in China, brown bears are bi-colored with a yellow-brown or whitish cape across the neck, chest, and shoulders. 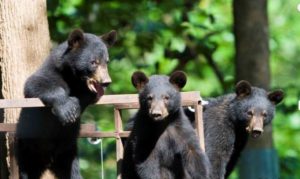 Black bears are only found in North America. The species ranges from Canada in the north to Mexico in the south, and lives predominantly in forests, feeding on fruit, nuts, shoots and vegetation.

Black bears tend to shuffle along slowly when walking, but are able to run at speeds of around 40-50kph. However, they cannot maintain this pace for long. Plump bears in heavy winter coats tire out particularly quickly

Despite their name, black bears are not always black – they can also be light brown, blond or even grey-blue. A subspecies of black bear with white fur, known as the Kermode or spirit bear, lives in British Columbia.

Female black bears can give birth to up to six cubs, and usually breed every other year. Cubs stay with their mother for about 18 months.

The most accurate way to determine the age of a bear is to count the rings in a cross section of its tooth root under a microscope. 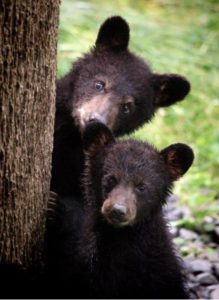 Stone-age hunters worshipped and hunted bears at the same time. To show their respect, they sang and danced and prayed that the bear would forgive them for killing it. The prehistoric Finns, along with most Siberian peoples, considered the bear as the spirit of one’s forefathers.

Bears are typically solitary animals, with the exception of courting individuals and mothers with their young. Once bears breed, they go their separate ways. Male bears do not help the mother bear raise the cubs. Depending on the breed, intercourse may last a few minutes (giant panda) or half an hour (polar bear).

The largest mammalian carnivore that ever lived on land was the giant short-faced bear. Twice the size of the biggest modern bear, it was 6′ 5″ tall at the shoulder when standing on all fours. Scientists believe it had very long legs and chased antelope on the North American prairies. It died around 12,000 years ago.

Bears can run very well both up and down hills. Bears can reach speeds of 56 kilometers (34 miles) per hour for short distances.

Bears can see almost as well as humans, and they can hear a little better. But they can smell much better. In fact, a bear’s sense of smell is around 100 times greater than a human’s. A bear’s eyesight is similar to ours. Bears can also see some color.

During hibernation, the bear’s metabolism slows down, its body temperature decreases slightly, and its heart rate slows from a normal value of 55 to just 9 beats per minute.

Hibernating bears are able to defy some basic rules of mammalian physiology. Five months of inactivity would lead to disastrous bone thinning in humans, but leaves bear bones unharmed. Although bears do not move their large muscles for more than 100 days, they actually increase their lean body mass in the den. And while bears do not urinate during their months of hibernation, their bodies show no buildup of urea, a toxic waste product of protein metabolism normally eliminated by the kidneys.

These long lived, intelligent animals will eat just about anything. They search out interesting smells, including our picnic lunches and garbage. In places like Yellowstone they are responding to drought, food scarcity and extreme hunger, taking up residence near people and buildings.

After bears start eating human food they lose their fear of people and it’s sometimes difficult to frighten them away, he said. They are thought of as problem bears, and problem bears are expensive, time consuming and dangerous. Most are eventually killed, and so it’s important to learn how to avoid encounters before heading out.

Most campers come in contract with black bears, as they are far more numerous than their brown bear cousins. Although few black bears attack people, they can inflict serious injury when they do.

Campers and backpackers can help prevent attacks by reducing attractive smells, including oily or high-fat food, garbage and pet food. Store food securely, away from the reach of bears. Bears that remain near buildings or campsites should be viewed as threats.

What To Do If A Bear Comes Into Your Campsite

The best thing to do is to make sure you have no food of any kind where a bear can get to it. This includes pet food and bird food. A bear that can’t get food will likely move on to some other location.

Bears do not naturally seek food from humans. This bear has likely learned to identify certain houses with obtaining food. Bears are smart. They are also strong. A determined bear looking for food can get through a screen door or even a glass door in no time at all. For other residential safety tips, visit our bear safety page.

When a bear does comes around, make loud noises. If the bear is not habituated, that should make it leave. If it does not leave, it is too used to obtaining food from humans. If the bear continues to come back and you feel uncomfortable,you should call the authorities

The best way to prevent an unpleasant bear encounter is to avoid them all together. Bears usually avoid people, and most people don’t even know when they’ve come close to a bear.

To ensure a surprise or unpleasant encounter with a bear doesn’t occur, avoid moving through bear habitat silently and alone. Travel in groups (the larger the better) and make lots of noise by talking or singing. Pay attention to your surroundings.

If you encounter a bear on the trail, or in your campsite, stop what you are doing and evaluate the situation. Identify yourself by speaking in a calm, appeasing tone. Back away slowly, preferably in the direction you came. Walk, don’t run, and keep your eye on the bear so you can see how it will react.

If you see a bear in the distance, respect its need for personal space. Do not approach it, even to get a photo, and give it as much room as possible. Consider turning around and leaving the way you came. If you must continue, take a detour and give the bear a wide berth.

Bear attacks are extremely rare. In the last 100 years, 57 people have been killed by black bears in North America. The same number of people die of bee stings in the United States every year.

Play dead if attacked by a mother grizzly, fight a black bear.

Playing dead will work if you’re being attacked by a mother grizzly defending her cubs. But it is the wrong thing to do if you’re being attacked by a predatory bear. If a bear attacks (particularly a black bear) in an offensive manner and physical contact is made, fight for your life. Kick, punch, hit the bear with rocks or sticks or any improvised weapon you can find.

While playing dead is an appropriate response when physical contact with a bear occurs or is imminent, playing dead prematurely can invoke a curiosity response from a bear. Park guidelines do not recommend playing dead prior to contact.

Why Do Bears Attack?

Attacks on humans are remarkably rare events but when they happen, they inevitably get the attention of the national news media. No one, however, can answer why bears “attack” any more than they can answer why humans attack other humans. Bears can attack for any number of reasons simply because they are wild and unpredictable creatures.

A bear’s natural reaction is to avoid humans. Not every habituated bear attacks humans but there have been instances of attacks on humans by bears that were regarded as a habituated or “nuisance” bears. However, it is a fact that a fed bear quickly learns that humans are a food source. Anytime bears are around humans, it increases the chance that there will be conflict between them. Aside from the harm it causes to the bear, people are foolish if they think feeding bears isn’t putting themselves at risk of serious harm.

Although extremely rare, a predatory bear may attack smaller, slow moving animals, including small children believing them to be a source of food. For that reason, it is vital that parents who take young children into the forest stay close to them and watch them at all times.

In one incident a few years ago, a bear attacked an adult who was camping in a tent because the man had fried chicken over a campfire earlier that day and the bear could smell the food source on the man.

In another incident, from several years ago, a bear “attacked” a man after the man’s companions had robbed him and left him for dead. The bear apparently saw the vulnerable human as a food source. (The companions were convicted of first degree murder, despite their argument that the bear was the actual killer.)

No one really knows exactly why bears attack humans. We cannot guarantee it won’t happen but if you enjoy being in the forest, you can take some common sense steps to minimize the risk: (a) Don’t travel alone. (b) Always store food properly, (c) use bear proof containers if available. (d) If you cook in the forest, wash up afterwards with unscented soap or sanitizer. (e) When hiking, talk and make noise. (f) Keep children nearby at all times.

Bears are amazing wonderful animals.  And there is no reason to live in fear of bears.  Just remember these simple bear rules

Stay at least 50 yards away from a bear.

Never run from a bear – a bear can run three times faster than you.

Never get between a mother bear and her cubs.

In a sudden bear encounter, avoid abrupt movements and back away slowly.

Hike in a small group for safety and always be vigilant for bears.

Never feed a bear. Keep all food and toiletry items away from bears.

Although black bear attacks are extremely rare, if you are knocked to the ground, fight back aggressively.

Always remember that no matter how tame bears may seem, bears are WILD ANIMALS!