The blue whale is the largest animal ever to have lived – bigger, even, than the dinosaurs. Yet they are elusive creatures, and little is known about their lives. Here we have some blue whale facts for kids.

The blue whale is the largest animal on Earth, yet we know next to nothing about it – where it breeds, how long it lives, even how many there are (possibly fewer than 8,000). Much information has come from US Navy hearing devices that pick up blues’ incredible vocalizations. Experts believe these deep rumblings may transmit between whales more than 65 miles apart.

Blue whales are thought to live to be about 110 years old.

Blue whales are the largest animals ever to have lived.

We picture dinosaurs as being these colossal things that nothing on earth measures up to…but blue whales are not only bigger than the biggest dinosaur we know about, they’re a LOT bigger.

Measuring 70 to 80 feet in length (the longest recorded length was 106 feet), blue whales can weigh as much as 90 to 150 tons. The female is larger than the male

The first indication of the presence of a blue whale is the sight and sound of its huge blow, rising up to 10m straight into the sky. Unlike toothed whales, the blue expels air through both blowholes at once – that’s the world’s largest pair of lungs emptying 90 per cent of their lung capacity.

A lot of biologists hypothesize that blue whales are near to the limit of size for life on Earth. Given the uncentralized central nervous systems that most animals on earth have, the timing for signals to get from brain to acting body part can get quite long when your tail is 30 m from your head. 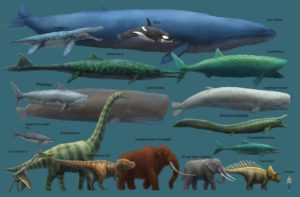 Blue whales are a grey/blue color and are mottled with lighter spots. The underside sometimes has a yellowish tinge, caused by an algae, which has given the blue whale the nickname of sulphurbottom. Blue whales have a tiny, stubby dorsal fin set far back with a large, thick tail. They have a splash guard in front of their two blowholes.

The aorta of a blue whale is large enough for a grown man to crawl through.

Blue whales are found in all the oceans of the world, although there are three main populations: one in the North Atlantic, one in the North Pacific and another in the southern hemisphere, particularly above Antarctica.

Blue whales used to be one of the most common whales in the oceans, now they’re one of the rarest (so much so that we don’t even know how they mate) because they were over-hunted.

Blue whales are oceanic animals and have been seen in every ocean. In the Northern Hemisphere, distinct populations exist near Iceland, California and in the region between Newfoundland and Greenland. In the Southern Hemisphere, the whales are often sighted in the Antarctic, and near Australia and New Zealand

The world’s largest creature depends on some of the smallest for survival. A 30-metre blue whale, which may weigh as much as 135,000kg, can consume 2-7 tonnes of minuscule krill a day, rolling onto its side to take as much in as possible. The blue is a relatively shallow diver and generally finds its food within 150m of the water surface.

Blue whales tend to live in pods of 2-3 individuals, although groupings of 60 or more animals have been reported. They tend to swim relatively slowly, although they can reach speeds of over 30km/hr if they are forced to.

Blue whales swim 14 miles per hour (with bursts as fast as 30 mph) and feed at depths of less than 330 feet (but can dive as deep as 1,640 feet). Dives last from 10 to 20 minutes. Usually they travel alone or in small groups of two to four, although off the coast of California some groups as large as 60 have been seen.

Sexual maturity is reached between 5 to 10 years. Females give birth every two to three years to one calf. Gestation is 10 to 12 months; average calf is 23 feet long and weighs 4,440 pounds. A calf is fed by its mother for seven to eight months.

Blue whales as a species are classified as Endangered by the 2000 IUCN Red List, although the North Atlantic stock are Vulnerable, and the North Pacific stock are listed as Lower Risk. In the 20th Century, the estimated total kill of blue whales was 350,000 animals and by the 1960s they were on the brink of extinction. Some populations may never recover. Some estimate the world’s population to be lower than 1,200.