New Zealand Sea Lions, also sometimes called Hooker’s Sea Lions, are the rarest and most vulnerable Sea Lions in the world. It is estimated that only 10,000 still remain, no thanks to decades of human hunting, being scooped up as bycatch for the commercial fishing industry, and bad-luck natural disasters. 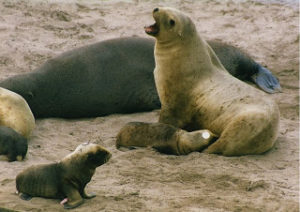 As the name states, these Sea Lions are found in New Zealand, specifically near the southern, Aubantarctic Islands. In fact, nearly the entire populations breeds at three colony sites on the Aukland Islands.

Breeding takes place from November to February. The males come ashore first to stake out spots, with the largest, strongest males claiming the most territory and the most number of mates. (Males can grow twice as large as females, if not bigger) Females (who are usually pregnant) arrive soon after. They give birth to a pup, and then breed again 1-2 weeks after. 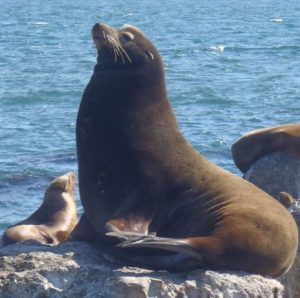 One standout fact is that during this entire breeding season, the males do not feed. Females return to the water to bring food back for themselves and their growing pups, but the males risk losing their territory if they leave. This is another reason why the largest males tend to be more successful– they have greater fat stores to sustain them during the summer.

New Zealand Sea Lions are listed as Vulnerable, and their are a handful of actions being taken to keep them safe. Their breeding grounds are now protected, hunting has been banned, and work is being done to prevent them from being captured in fishing nets. Unfortunately, disease has also stricken the Sea Lions– several different bacterial diseases have spent through the colonies in the past 20 years. The worst, in 1998, killed 53% of all newborns and 20% of breeding females. There is a bright side though– births in 2013 were the highest they had been in 5 years, and Sea Lions are starting to breed again on islands that had long been absent of colonies.