The cutthroat trout (Oncorhynchus clarkii) is a fish species of the family Salmonidae native to cold-water tributaries of the Pacific Ocean, Rocky Mountains, and Great Basin in North America.

As a member of the genus Oncorhynchus, it is one of the Pacific trout, a group that includes the widely distributed rainbow trout. Cutthroat trout are popular gamefish, especially among anglers who enjoy fly fishing. The common name “cutthroat” refers to the distinctive red coloration on the underside of the lower jaw. The specific name clarkii was given to honor explorer William Clark, co-leader of the Lewis and Clark Expedition.

Cutthroat trout usually inhabit and spawn in small to moderately large, clear, well-oxygenated, shallow rivers with gravel bottoms. They also reproduce in clear, cold, moderately deep lakes. They are native to the alluvial or freestone streams that are typical tributaries of the rivers of the Pacific basin, Great Basin and Rocky Mountains. Cutthroat trout spawn in the spring and may inadvertently but naturally hybridize with rainbow trout, producing fertile cutbows. Some populations of the coastal cutthroat trout (O. c. clarkii) are semi-anadromous.

Here are some of the less common Cutthroats:

These freshwater fish once had a massive range that extended over the Rockies and the American West. Today they are limited to only 1% of that, and are found only in the state of Colorado (where it is the state fish). 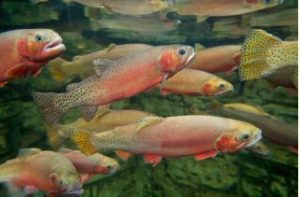 The Greenback Cutthroat Trout grows to lengths of around 1.5 ft, and weighs up to 10 lbs. They have brilliant green and red coloration, complete with spots, and become even more vibrant during spawning.

The reason for the decline of this fish is threefold– they were over-fished, they dealt with industrialization and toxic runoff from mining, and they had to compete with introduced fish species. The U.S. Fish and Wildlife Service has been undertaking recovery efforts for the past few decades. Unfortunately, inter-breeding and the persistence of threats have kept these fish to just a 4 mile stretch of the Bear River. 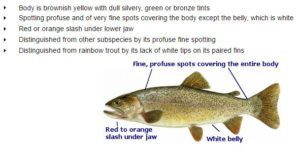 Adults migrate from the ocean to spawn in fresh water. Juveniles migrate to the sea where they feed and become sexually mature before returning to fresh water to overwinter and spawn. Unlike Steelhead and Pacific salmon, coastal cutthroat do not make lengthy migrations out to sea. Generally speaking, coastal cutthroat will remain in or near estuarine waters, usually within 5–10 mi (10–15 km) of their natal stream. Some cutthroat, however, have been shown to move as far as 70 mi (110 km) into the open ocean. There are also lacustrine and riverine populations that spend their entire lives in freshwater. One such population is the trout of Lake Crescent in Washington state that was formerly considered to be a separate subspecies called the Crescenti trout, Oncorhynchus clarkii crescenti.

​​​Colorado River cutthroat trout, Oncorhynchus clarkii pleuriticus​, are one of three recognized subspecies of native trout found in Colorado. They historically occupied portions of the Colorado River drainage in Wyoming, Colorado and Utah. Widespread introductions of non-native salmonids over the last century have served to limit current distributions primarily to isolated headwater streams and lakes. As such, the Colorado River cutthroat trout is designated as a species of special concern in Colorado, and significant resources have been dedicated to conservation of the subspecies.

Recent research efforts have revealed two distinct lineages that comprise Colorado River cutthroat trout. The native range of one covers the White, Yampa, and Green River basins, while the other appears to be centered around the Gunnison, Dolores, and Colorado River basins. Further genetic research will be needed to resolve the relationship between these two lineages. Both were widely stocked around Colorado starting in the late 19th and early 20th centuries.​​

The Lahontan cutthroat is native to the drainages of the Truckee River, Humboldt River, Carson River, Walker River, Quinn River and several smaller rivers in the Great Basin of North America. These were tributaries of ancient Lake Lahontan during the ice ages until the lake shrank to remnants such as Pyramid Lake and Walker Lake about 7,000 years ago, although Lake Tahoe—from which the Truckee flows to Pyramid Lake—is still a large mountain lake.

Lahontan cutthroats evolved into a large (up to 1 m or 39 in) and moderately long-lived predator of chub, suckers, and other fish as long as 30 or 40 cm (16 in). The trout was able to remain a predator in the larger remnant lakes where prey fish continued to flourish, but upstream populations were forced to adapt to eating smaller fish and insects. Some experts consider O. c. henshawi in the upper Humboldt River and tributaries to be a separate subspecies, O. clarkii humboldtensis or the Humboldt cutthroat trout, adapted to living in small streams rather than large lakes.

The record size cutthroat trout of any subspecies was a Lahontan caught in Pyramid Lake weighing 41 lb (18.6 kg), although anecdotal and photographic evidence exists of even larger fish from this lake.