May 2, 2016 smallanimalplanet Animals and Humans

In the dry scrub of Gir National Park in Gujarat, B P Pati, Deputy Conservator of Forests, has found what he believes is evidence for homosexual behaviour among Asiatic lions (Panthera leo persica) in the absence of females. Pati, along with a team of dedicated wildlifers, studied a young pair of lions, around six to seven years of age, and they showed tendencies of homosexuality. 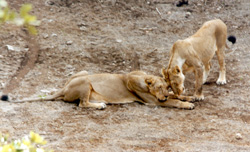 Back in 1982, Sanat Chauhan, now Principal Chief Conservator of Forests in Gujarat, had made similar observations on a pair of lionesses in the world famous home of the Asiatic lion. Meanwhile, experts working on African lions have never come across similar behaviour.

Aberrations are far from unusual among animals. Studying the behaviour of animals such as the lion is a painstakingly slow process that can take years of observation and a meticulous understanding of the circumstances that lead to a particular pattern, a choice of action, and a course of life among animals. In other words, cases such as Pati’s observations are best treated as individual cases without making generalizations for the entire species in general.

This is perhaps why one of the world’s best known big cats experts, Peter Jackson, Ex-chair of the IUCN Cat Specialist Group and Advisor and Editor of Cat News, has expressed a note of caution. He says that close friendships develop between individuals of the same sex in many, if not all, species, including humans. But they are not necessarily sexual and it is essential to find out that mating took place. Pati has given photographic evidence of the finding in Gir, with detailed explanations, but as the pair was observed only for one season, it may be premature to draw inferences on whether it is an acquired habit or mere adaptation to circumstances. 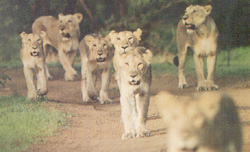 Under normal circumstances, Asiatic lions live and hunt in a group, or the pride. Like human families, a pride is a stable and permanent social group of related adult females and males (whoever is in possession of the group at that time) and their cubs. This family occupies a particular ‘home range’ or ‘territory’. The lions’ territory is the place of maximum action where hunting, resting, feeding and the rearing of cubs take place. Normally a lioness with cubs prefers to confine herself to a smaller area with protection and food for the cubs. The males occupy a larger area of control, which may overlap with that of more than one female. This provides them an opportunity to mate with as many females of the group as possible.The lions of Gir are famous for their companionship, and it is well known that except during mating, they prefer to associate with members of their own sex. Scientists have observed how two male lions feed simultaneously with their heads touching. Females rubbing their heads together, a gesture normally seen in courting lions, and sharing a carcass are other such observations.

In normal course, a mating pair stays close together for days, hunting as a pair for a long span before actual mating occurs. This stems from the lioness allowing only one male to form such an association at one time. This prolonged association reassures the female that the preferred male is the right occupant of the territory and not an intruder. On the other hand, males are quite fussy during courting and do not tolerate the presence of alien lions and any intrusion leads to serious fights.

Incidentally, the lions studied by Pati and his team are normal healthy males that prefer each other’s company but have also sired cubs. Together, they control a 70-square-kilometre territory that has four females. Pati says: ‘The period of study happened to coincide with the prime season of mating, and all the four lionesses of the pride were involved in rearing cubs.’ He believes this circumstance to be central to the two male lions choosing to remain together.

According to Dr Craig Packer, professor at the Department of Ecology, Evolution and Behaviour in the University of Minnesota who has been working on the lions of Serengeti, he has never come across any prolonged homosexual behaviour in the wild. However, he does mention ‘a couple of cases of genetic mutant males that behaved exactly like males’. Packer says that this condition occasionally occurs in dogs too and is due to a defect in the male hormone receptors. Homosexuality in African lions has been observed only in captive lions and has been attributed to that unusual circumstance. However, what triggered this behaviour in the Asiatic lion is difficult to ascertain. The best choice for Pati and his team would be to extend the study and watch out for larger trends. Meanwhile, it’s a jury that is still out.