The diet for skunks is a combination of plants and animals. Essentially, skunks are omnivores which answers the question: what do skunks like to eat the most? The skunk diet is seasonal and more dependent on the availability of food rather than choice. They tend to eat an equal amount of animal and plant matter in winter and autumn. In spring and summer, skunks eat more insects and less plants. So as not to be overwhelmed by their prey, skunks usually go for creatures that are much small than them. They tend to eat more of the following:

Do you know that skunks mostly like eating insects? However, they don’t spare relatively helpless small animals. Skunks may thus attack animals such as mice, rabbits, squirrels, snakes, and voles. Ground-nesting birds aren’t spared either. They commonly target flightless birds and the eggs of those who build nests on the ground. Amphibians like frogs and reptiles like lizards. Essentially, skunks are not very choosy when it comes to the types of prey they go for. It would seem any creature that looks smaller is fair game for a skunk

Skunks have a spray with a lingering and potent odor that’s a nuisance to every human. Because we always think of this nasty odor we may underestimate how useful these creatures are for humans.

Are you afraid of cockroaches, snakes, and scorpions? It turns out skunks aren’t afraid of any of these animals. Part of skunk menu is the black widow spiders which are so poisonous they can cause some super miserable bites with a single sting. You will be surprised that these poisonous pests and insects are the perfect answer to the question: what do skunks like to eat the most? In fact, it is estimated that 70 percent of skunk diet consists of insects that are considered harmful to humans.

Like any omnivores, skunks like eating animal-based foods. These sources of food aren’t available in fall and winter. Skunks have to wait till spring and summer before they can have their favorite diet. In the intervening months they eat whatever insects or small animals they can find. That’s beside adopting to a more plant-based diet. Many of the plants they eat are similar to what a squirrel eats. Some of the plants they eat include berries, grapes, cherries, and corn. They eat food that has already fallen to the ground. That means they have no qualms eating rotting fruits and crops that 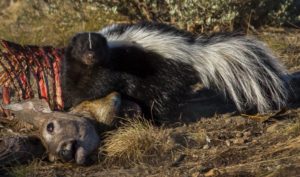 As earlier observed, skunks are not picky when it comes to diet. They essentially eat whatever they find regardless of whether it’s garbage outside your home. Dead animals are also on the menu. Around humans, skunks are sure to find insects, rodents, and rotting food. That’s why you might find skunks rummaging through open garbage cans or dumpsters in search of a meal. Watch out for intruders in your outdoor grills and bird feeders.

What’s the answer to the question: what do skunks like to eat the most? They definitely like eating animal and insects. Plants and other carrion only complement this.