Eleven chinchillas (commonly referred to as chins) were brought from the Andes Mountains in South America in the 1930’s. All chinchillas presently in North America are descended from these eleven chinchillas. Originally imported for the fur industry these luxuriously furred animals started entering the pet industry in the 60’s as people began to realize their intelligence level and their value as a pet.

This animal is in the rodent family along with rabbits, guinea pigs, and squirrels. A big

difference is that their babies (average of two per litter) are born after approximately 111 days gestation fully furred eyes open and raring to go. More than one baby has escaped a cage and gone exploring on its own before the owners are even aware that it was born.

The standard color is a steely gray. Over the years special breeding has led to a variety of colors including TOV or touch of velvet (black or brown all over except for a white belly), beige (light and dark), mosaic (white with gray or black patches), ebony (all black), pink-white (white with pink eyes and ears) and sapphire (powdery gray with a purplish hue).

The body is much like a rabbit’s with smaller feet and they will hop like their rodent-cousin, as well. The tail is much like a bushy squirrel tail. Average adult chins will weigh around 500 to 650 grams. Their front paws are quite dexterous and can be used for holding food or undoing cage door latches with equal vigor. Touching their fur is often likened to touching silk or a cloud. They bathe in special sand that absorbs the oils in their fur and this keeps their fur soft and healthy.

A healthy chin has a firm body. You should be able to feel the ribs slightly but neither the ribs nor the spine should particularly stand out. The fur should be fluffy and clean with no spots chewed down by a nervous, stressed chin. The chin should be alert with bright eyes and inquisitive. A healthy, well cared for chin can live 15 – 25 years. A chin that will make a good pet is one that is not afraid to approach a stranger and may even crawl right into your hands or onto your arm at first meet. Be wary of nervous chins – they can bite hard and females can shoot a stream of urine when frightened or cornered.

A chin should be housed in a fairly good sized cage with at least two or three shelves since chins are active animals and love to run, jump and bounce off the walls. If you are unable to allow the chin out for an hour long run almost every night you may wish to purchase a large, solid wheel for it to run on in the cage. Avoid wire wheels as more than one chin has obtained a broken leg or tail from slipping between the wires. There should be a house inside that a chin can hide and sleep in. Chins sleep during the day and are most active at night when it is cooler. Avoid placing the cage in a damp area such as an unfinished basement as fungus growth can result in loss of fur on a chin. Uncolored newsprint paper is good for bedding and for lining the bottom of the cage. Take care of wood shavings (especially cedar) as bedding because they can lead to respiratory problems in chins. The only wood shaving that should be used are kiln-dried pine or white aspen. 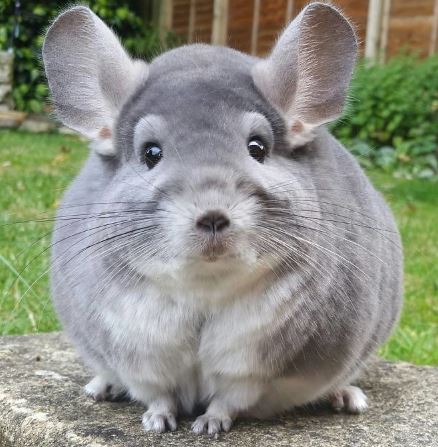 Chinchillas eat special chinchilla pellets, hay, and water as a basic diet. Additions can include calf manna and/or mash, a mixture of a variety of grains. Treats can include raisins, grapes, or sunflower seeds but too much of these treats can lead to gastric problems such as diarrhea. There should also be chew toys made of kiln-dried pine (such as Popsicle sticks or untreated lumber from your local hardware store) or apple tree branches. Do not listen to people who say that they can eat anything a hamster or guinea pig eats. Ex. Corn can cause chins many dangerous problems.

Chins vary greatly in personality. They can be quiet and contemplative or hyper and entertaining. It is best to find a chin seller or breeder who will allow you to interact with your chosen chin before you take it home to insure that you are compatible.

If you take the time, and are patient, you can teach your chin tricks such as come, sit, rollover. This is a highly intelligent animal and more often than not, if you let them, they will teach you their favorite games, such as tag or hide and seek