May 23, 2017 smallanimalplanet Life Cycle of Animals

Animals A-Z finds us with the American Martin, an agile tree-living member of the weasel family that hunts for small mammals and birds among the conifer forests of North America. 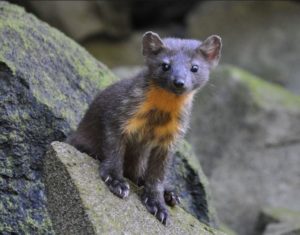 Normally 10-15 years. American marten in captivity may live for 15 years. The oldest individual documented in the wild was 14.5 years old. Survival rates vary by geographic region, exposure to trapping, habitat quality, and age. In an unharvested population in northeastern Oregon, the probability of survival of American marten ≥9 months old was 0.55 for 1 year, 0.37 for 2 years, 0.22 for 3 years, and 0.15 for 4 years. The mean annual probability of survival was 0.63 for 4 years. In a harvested population in east-central Alaska, annual adult survival rates ranged from 0.51 to 0.83 over 3 years of study. Juvenile survival rates were lower, ranging from 0.26 to 0.50. In Newfoundland, annual adult survival was 0.83. Survival of juveniles from October to April was 0.76 in a protected population, but 0.51 in areas open to snaring and trapping. In western Quebec, natural mortality rates were higher in clear cut areas than in unlogged areas.

Martens are agile and graceful members of the weasel family with long slender bodies and tails, and thick fur. The American marten has rich chocolaty fur with a small, pale bib on the throat.

The American marten is a long, slender-bodied weasel about the size of a mink with relatively large rounded ears, short limbs, and a bushy tail. American marten have a roughly triangular head and sharp nose. Their long, silky fur ranges in color from pale yellowish buff to tawny brown to almost black. Their head is usually lighter than the rest of their body, while the tail and legs are darker. American marten usually have a characteristic throat and chest bib ranging in color from pale straw to vivid orange. Sexual dimorphism is pronounced, with males averaging about 15% larger than females in length and as much as 65% larger in body weight.

Total length ranges from 1.5 to 2.2 feet (0.5–0.7 m),with tail length of 5.4 to 6.4 inches (135-160 mm), Adult weight ranges from 1.1 to 3.1 pounds (0.5–1.4 kg)and varies by age and location. Other than size, sexes are similar in appearance. American marten have limited body-fat reserves, experience high mass-specific heat loss, and have a limited fasting endurance. In winter, individuals may go into shallow torpor daily to reduce heat loss.

Northern North America to Sierra Nevada and the Rockies in Colorado and California. The marten lives in mature coniferous or mixed forests in Alaska and Canada, the Pacific Northwest of the United States and south into Northern New England and through the Rocky Mountains and Sierra Nevada. Small groups of martens live in the Midwest in Minnesota and Wisconsin. Trapping and destruction of forest habitat have reduced its numbers, but it is still much more abundant than the larger fisher. The Newfoundland subspecies of this animal (Martes americana atrata) is considered to be threatened. 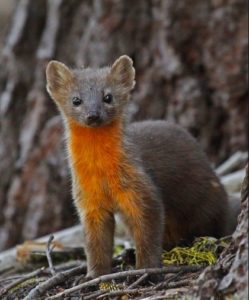 Small mammals and birds are a staple of American marten. They are opportunistic predators, influenced by local and seasonal abundance and availability of potential prey.They require about 80 cal/day while at rest, the equivalent of about 3 voles (Microtus, Myodes, and Phenacomys spp.). Voles dominate diets throughout the American marten’s geographic range, though larger prey—particularly snowshoe hares—may be important, particularly in winter. Red-backed voles (Myodes spp.) are generally taken in proportion to their availability, while meadow voles (Microtus’ spp.) are taken in excess of their availability in most areas. Deer mice (Peromyscus maniculatus) and shrews (Soricidae) are generally eaten less than expected, but may be important food items in areas lacking alternative prey species. Birds were the most important prey item in terms of frequency and volume on the Queen Charlotte Islands, British Columbia. Fish may be important in coastal areas.

American marten diet may shift seasonally or annually. In general, diet is more diverse in summer than winter, with summer diets containing more fruit, other vegetation, and insects. Diet is generally more diverse in the eastern and southern parts of American marten’s distribution compared to the western part, though there is high diversity in the Pacific states. American marten exhibit the least diet diversity in the subarctic, though diversity may also be low in areas where the diet is dominated by large prey species (e.g., snowshoe hares or red squirrels).

American marten may be important seed dispersers; seeds generally pass through the animal intact, and seeds are likely germinable. One study from Chichagof Island, southeast Alaska, found that Alaska blueberry (Vaccinium alaskensis) and ovalleaf huckleberry (V. ovalifolium) seeds had higher germination rates after passing through the gut of American marten compared to seeds that dropped from the parent plant. Analyses of American marten movement and seed passage rates suggested that American marten could disperse seeds long distances: 54% of the distances analyzed were >0.3 mile (0.5 km).

Martens are very agile and leap from branch to branch through the trees, marking their common pathways with scent. They are usually solitary hunters.

Mating occurs during the late summer but the fertilized eggs do not implant in the uterus for 6-7 months. Gestation after that is only 2 months, with the young being born in early spring. The litter is usually 1-5 and the young are born blind, deaf and only sparsely furred. They are weaned at 2 months, and can hunt for themselves at 3-4 months.

Hunting and habitat loss has led to a decline in populations, but the species is not considered threatened