The armadillo lizard is super rare and almost impossible to get one as a pet. This lizard used to be common in the pet trade, but no longer. Wild populations are considered threatened and it is no longer legal to collect them for sale in the pet trade. They are very rare in the pet trade, and are very expensive when available at all. It can live up to 25 years in captivity, or slightly longer in rarer cases.

Why Does the Armadillo Lizard Curl in a Ball?

The armadillo lizard normally only rolls up in a ball when it is scared.  They do not like to 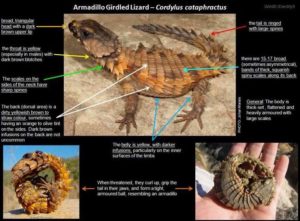 be handled. The armadillo lizard curls in a ball as a way of protecting itself. If caught by a predator or a human, it will curl up, grip its tail in its jaws and form a tight, armored ball in the manner of an armadillo. In this position, the soft underparts are protected and the lizard is too spiky for many predators to eat.

They are very skittish and like being left alone. Unusual for a lizard, the armadillo girdled lizard is a sociable reptile with its own kind.  In the wild it’s not uncommon to find between 1 and 30 individuals sharing a rock crevice for long periods. Normally these groups comprise an adult pair along with juveniles.

What Do Armadillo Girdled Lizards Eat?

The armadillo girdled lizard feeds mainly on small invertebrates, such as insects and spiders, but sometimes also take plant material. In captivity, they are commonly fed crickets. In the wild, its most common prey items are termites or ants, millipedes, and scorpions.

How Big is the Armadillo Lizard?

The average size for an armadillo lizard is 3 to 4 inches from snout to vent.  They can get between 7 to 9 inches for a very mature lizard. These amazing lizards can weight up to 3 pounds.

How long Does an Armadillo Lizard Live?

Armadillo lizards occur naturally in South Africa. They are diurnal creatures, reaching an adult size of somewhere between seven to nine inches in length. They live in social groups amongst rocky outcrops, wedging themselves between the cracks and crevices of the rocks, much like a North American chuckwalla does for protection from predators and the elements.

The armadillo lizard is a potentially long lived species, with life spans reaching 20 to 25 years in captivity. Average and maximum life span in the wild is apparently not known

The Armadillo Lizard as a Pet

If you absolutely can not help yourself and you just have to have a beautiful reptile such this one, at least make sure you’re buying from a reputable source. A significant percentage of the animals sold are caught in the wild and not bred.

It is highly recommended if you choose the armadillo lizard as your pet that you keep more than one together for the animals’ sake.

Parasites are also an issue, not to mention that those animals caught in the wild rarely make it longer then a year (and just because it’s not a dog, doesn’t mean it’s easily replaceable). Although pet stores could in theory treat prophylactically for parasites, they probably can’t justify vet exams of each animal, and prophylaxis has the potential to be more harmful. One simply needs to understand the risks of you are putting these animals in. It won’t matter whom what gets the animal from, odds are it has the same original source and problems.  Illegal wildlife trade is still the second-largest trade in the world after drugs. 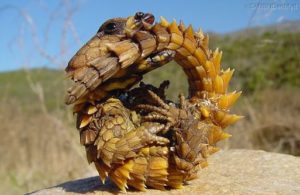 A 30-gallon tank provides enough room for two lizards. However, providing the largest enclosure possible is better so your lizards feel they have plenty of room. Armadillo lizards need hiding places, a UV-B lamp, a heat lamp or pad, and a dish of water. They can tolerate a number of different substrates, but sand most closely replicates their natural environment. They require a daytime temperature of about 85 degrees Fahrenheit, with a basking area between 120 and 130 degrees. Nighttime temperatures should be between 60 and 70 degrees across the heat gradient. Armadillo lizards like hiding places in both the cool and warm sides of the terrarium. A rock or log should be positioned under the heat lamp so they can bask easily. Humidity between 45 and 55 percent is ideal. Misting the tank daily helps keep humidity at the proper level.