What is a Babirusa?

The babirusa (Babyrousa babyrussa) is a bizarre-looking pig from Indonesia. The males have extraordinary tusks which develop from their canine teeth, growing up through the skull and growing in a curve until it pierces the skull again between the eyes. The babirusa has been called “a wild pig with a dental problem.”

The word babirusa means “pig deer” in Malagasy, as their wild-growing tusks are reminiscent of deer antlers.

How Long do Babirusa Live?

How Many Species of Babirusa Are There? 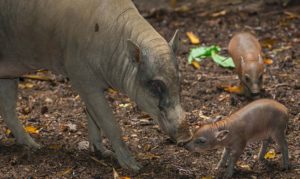 The babirusa is a bizarre-looking pig with males having curved tusks growing vertically up through its upper jaw and curving back down to pierce the skull between the eyes. The lower canine teeth also grow upwards and curve back to form a second set of tusks. The skin is a brownish grey colour and is covered in sparse white or grey bristles.

How Big is a Babirusa?

What are Babirusa Tusks For?

It’s actually a mystery. One hypothesis is that the males use their tusks during fights over 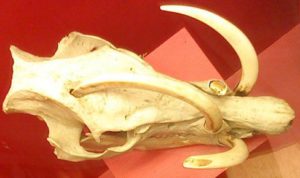 females. It seems reasonable, until you look at how babirusas really fight. They don’t hook tusks, but stand up on their hind legs and “box” each other with their front hooves. Additionally, babirusa tusks aren’t built to withstand much pressure; they are brittle and easily broken, not at all suited for combat. It seems likely that the tusks serve a display purpose, perhaps signaling genetic fitness to females, but this is an idea that hasn’t been tested. For now, the purpose of those marvelous tusks is still a mystery.

What Is the Babirusa Tusk Death?

Babirusas with spiralling tusks, some authors say that, if the animal lives long enough, the tusks grow fatally into the face.

Where are Babirusa Found?

The babirusa is only found on a few Indonesian islands: Sulawesi, Togian, Sulu and Burn Islands.

In the wild, male babirusas tend to live in solitary or in bachelor herds of two to three males, while females can be found in groups of up to eight individuals with young. They spend the majority of the day roaming and foraging throughout the forest.

What do Babirusa Eat?

Babirusa live in groups of one or a few adult females and their young while the adult males are solitary. They spend much of the day in mud wallows, rubbing off the dried mud and skin parasites on trees afterwards. 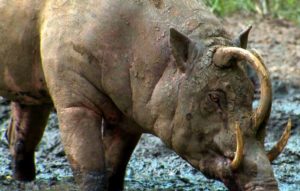 The males stand on their hind legs and ‘box’, presumably trying to break their opponent’s tusks. 125-150 days after mating the females produce a very small litter of only 1-2 piglets, born in a nest of underbrush. She has only one pair of teats from which to feed them.

The babirusa is listed as Vulnerable, following increased hunting and habitat loss over the last 20 years or more. Despite protection, illegal poaching continues and only a few thousand individuals are left.