May 9, 2017 smallanimalplanet Animals are Amazing

Wombats are large, pudgy mammals. They are marsupials, or pouched animals, found in Australia and on scattered islands nearby. Like other marsupials, wombats give birth to tiny, undeveloped young that crawl into pouches on their mothers’ bellies. A wombat baby remains in its mother’s pouch for about five months before emerging. Even after it leaves the pouch, the young animal will frequently crawl back in to nurse or to escape danger. By about seven months of age, a young wombat can care for itself.

Like rodents, wombats’ teeth grow continuously to compensate for the wear and tear caused by the silica in grasses. 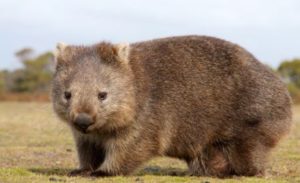 Vombatus is their native name in New South Wales. Ursinus is Latin for ‘bear-like’.

They live up to 26 years in captivity, but their lifespan in the wild is not known.

Wombats are stocky with short limbs and tail, and powerful forelimbs and shoulders. They have massive forefeet with bear-like claws. Their coat is coarse and black, brown or grey, and they have a bare muzzle and short-rounded ears.

They live in south East Australia, Tasmania and Flinders Island.

They feed on grasses, sedges, rushes and the roots of shrubs and trees.

Wombats are nocturnal, secretive and spend most of their time underground – hence little is known about them. They live in burrows up to 30m long, with several entrances.

Females give birth at any time of the year, producing a single young. It lives in her pouch for six months, after which it stays with her for another year. They become sexually mature after 2 years.

V.u.ursinus is classified as Vulnerable by the IUCN Red List 2000 and have become extinct in parts of their former range. Wombats are threatened by habitat clearance and competition with rabbits. 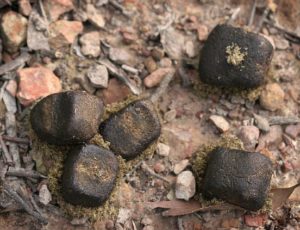 Wombat poop square shaped because wombats have a long digestion cycle which makes the poop exceptionally hard and compact . The first part of their digestive tract has horizontal ridges which forms the flat edges, and due to the hardness of the poop, the anus and rectum do not reshape it on the way out in the same way as it does for animals with softer poo.

Cubed poo was evolutionary beneficial as wombats use their poo to mark territory in ways that alert other wombats to their whereabouts – this means often pooping on top of rocks and logs to be easily found. The cube shape prevents the poop from rolling off these places, eventually leading cube pooping wombats to find each other and procreate their non-cube-pooping counterparts into extinction

Square wombat poop keeps it from rolling downhill into their burrow, keeps it in place as trail markers and warnings, and makes them a handy shape for shelf storage.