5 of the Most Solitary Animals in the World

Just like human beings, there are animals which are gregarious and enjoy being in groups, herds or pairs. Other prefer the quiet company of solitude, tranquility, and being by themselves. It doesn’t necessarily mean that solitary animals are sad, lonely or melancholic. In fact, they are self-reliant, a trait that ensures their survival. Others don’t trust strangers and are happy to be independent in that manner. Most solitary animals would look for partners only when they want to mate.

Although bears are of many species, almost all of them like to live alone. Naturally, bears are solitary animals and most of its species live like this, especially the giant panda. Another bear species that’s extremely shy is the red panda who prefer the company of a tree. For the polar bears, a nice patch of ice would do for great company. However, bears aren’t always alone as they usually meet others of their kind for mating purposes.

Although rhinos are known for being so tolerant towards other animals, they have limited

patience and can be somehow hard in character. Of these animals, it’s the males which are most solitary as females don’t mind spending time in the company of each other. But that doesn’t mean that black rhinos don’t spend time bonding with each other. They tend to get along more easily when they are of different ages and don’t see each other as a threat. For solitary animals, black rhinos aren’t that territorial.

As a semi-aquatic animal, the platypus is native to Australia. It has a strange physical appearance that comes with a beak like that of turtles and some birds. Although it lays eggs, the platypus is actually a mammal. For most of their lives, platypuses are solitary animals for most of their lives. You may occasionally see them in pairs and mothers usually stay in the company of the young ones for several months. 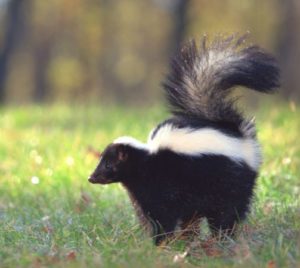 Although skunks exist in different species, most of them are solitary animals. When skunks feel threatened, attacked or nervous, they tend to release a strong odor to repel any creature within a short distance. So as not to offend other animals, skunks largely prefer to live on their own. Where the climatic conditions are colder, skunks prefer to share dens, especially among the females. Although male skunks mate with more than one female, they rarely stay together after that. As for the female skunks, they tend to stay with their kittens for a year to protect them from harm.

Leopards live in places such as the jungle, forest, and savanna. They are beautiful big cats

that only meet with others of their own when they are mating or taking care of the young ones. Most of the other time, leopards have no problem being on their own without owing anything to anyone. It’s all because these solitary animals require no help from a pack to hunt successfully.

Now you know which animal spends most of its time alone.