Crocodilians are reptiles, the first of which appeared around 320 million years ago.  Reptiles arose directly from the amphibians, a diverse group of animals at that time. At the time that reptiles evolved, the world’s fauna consisted of invertebrates, fish and amphibians – mammals or birds were to evolve from reptiles some 120-180 million years later. The adaptations of crocodiles has made the crocodile on the world’s most amazing animals. 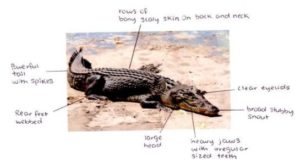 To understand why reptiles were destined to be so successful, it is important to look at the structure of their eggs. Amphibians usually spawn their eggs, with fertilization taking place outside the body, typically with the male shedding sperm over unfertilized eggs deposited by the female. The eggs are very susceptible to desiccation, and so the majority of amphibian species must lay their eggs in water or at least in very moist places. In addition, the eggs are typically small and contain little food for the developing embryo – as a consequence, free-living embryos (tadpoles) are essential. This mode of reproduction limited amphibians to areas containing water.

Reptilian Egg Has the Advantage 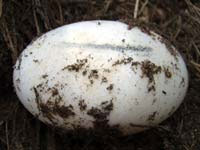 The reptile egg shows a number of advances over the amphibian egg. Firstly, it is contained within an eggshell, which controls water loss. Secondly, it is endowed with a substantial food supply (yolk), which provides sufficient nutrition for the embryo to completely forego a “tadpole” stage. Thirdly, the eggs are fertilized within the female, before they are laid. Thus, males do not have to be present at the exact time of egg-laying. Taken together, these attributes allowed reptiles to reproduce without the need to return to water. They allowed reptiles to dominate the terrestrial environment.

Between 320 and 220 million years ago, there was an explosion of different reptile body forms – some were large, others were small, some dominated the land surfaces, others the sea. The “Age of Reptiles” had arrived, and reptiles were to flourish for 155 million years. About 65 million years ago, the group suddenly suffered mass extinction – most of the known reptiles from that time entered the fossil record.

The Mesosuchians were the largest group of early crocodilians, which included both terrestrial and marine forms. Marine Mesosuchians had flippers rather than feet and had a laterally compressed tails resembling those of sharks. Yet there were also specialised, carnivorous, land-dwelling Mesosaurs with long, serrated teeth. Most Mesosuchians became extinct 65 million years ago, but some managed to survive in Australia until about 1 million years ago.

In contrast, the Eusuchians, the group to which all living crocodilians belong, were a rather conservative group. The first Eusuchians evolved around 120 million years ago. All surviving crocodilians are in the Order Crocodylia, which is divided into three discrete Families (Crocodylidae, Alligatoridae, Gavialidae), which have been separated from each other for at least 60 million years.

Crocodiles adaptations include body armor that protects them from predators, strong jaw muscles that allow them to crush bones, a powerful immune system to fight off illness, behaviors that allow them to control body temperature, an evolved metabolism that allows them to go for extended periods without food, and the ability to shut down their body and live from its own tissue if the need arises. Modern crocodiles as we know them first appeared around 80 million years ago, and they have outlived dinosaurs with little changes to their bodies throughout time.

Crocodiles are cold-blooded creatures who are able to gather the heat they need from the environment in which they live. They are capable of controlling their body temperatures by seeking out water when the weather is hot and lying in the sun whenever they are cold. This ability allows them to conserve energy, which is helpful when the crocodile doesn’t have a steady food source.

The metabolism of the crocodile has evolved so it can store almost everything it eats. The crocodile can go without food for over a year, although most have around 50 meals annually.

With the most highly developed and complex brains of all reptiles, crocodiles possess keen awareness and a strong learning ability. Their heightened auditory and olfactory senses forewarn them of dangers and guide them toward prey. To enhance their underwater visual capacity, a protective membrane covers their eye. The iris of their eye achieves optimal night vision. They learn to avoid repeated threatening situations by navigating new routes after a single perilous encounter. This has thwarted numerous attempts of their capture by human beings.

These adaptions, along with the crocodile’s complex brain and its superior ability to hear and smell have helped the species survive for a millennium.

Saltwater crocodiles are not the only animals that have adapted to a semi-aquatic existence; animals from a variety of lineages exhibit similar adaptations. For example, just as crocodiles have webbed feet that help them to swim, animals as diverse as beavers, ducks and frogs also possess and use webbed feet. The eyes and nostrils of many aquatic animals — including snakes, frogs and turtles — are on the dorsal, rather than lateral, surface of the head, just as they are in crocodiles. Finally, just as sea snakes, aquatic lizards and fish have laterally flattened bodies or tails, crocodiles use their flattened tails to propel themselves through the water.