What is the Quietest Animal?

Did you know that the owl can fly so silently that it will be only a few inches from its predator before being detected? The question as to what is the quietest animal has more to do with the sound they do and don’t produce. Clearly, the owl stands out as the most silent given the way it moves while approaching its prey. Unlike other large birds, owls have the ability to fly quietly through the night sky.

Owls are able to fly silently for a number of reasons. Their main silent advantage is due to their specialized feathers. Air rushing over an ordinary wing typically creates a huge noise as air turbulence builds up over large areas. Not so for the owl which has a few ways to alter the turbulence and cut down its noise.

The owl has feathers with hooks and bows on the leading edge. These are known to break up the air into tiny, micro-turbulences that roll over the wing in the direction of the trailing edge. The edge is basically made of a flexible fringe which breaks the air further as it moves from the trailing edge. If you are still asking what the quietest animal is, this is what causes a large reduction in aerodynamic noise.

Owls Are Almost Undetectable By Sound 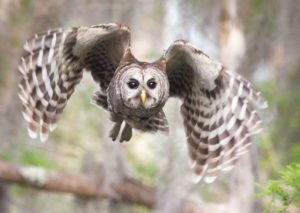 If there is still any remaining noise that’s enough to be detected by the owl’s prey, this will be absorbed by the velvety feathers on its legs and wings. The velvety feathers are designed to absorb high-frequency sounds that would rouse most prey and humans. It is because of these feathers that owls have the ability to remain undetected when they are in flight. The owl takes the title of the most silent predator due to the serrated nature of the leading edges of its wings. This is most effective in cutting aerodynamic noise when the wing it at a steep angle. It becomes most critical when the owl is closest to its prey.

Scientists suggest that the owl’s enormous wings, as compared to its body size, also ensures greater lift. It’s this feature that enables this bird to fly very slowly, just about two miles per hour. In fact, some people have described it as being ‘buoyant in flight and moth-like’. That’s how they are able to sneak onto their prey almost undetected.

Falcons are Fast, Owls are Silent

Compared to other birds, such as Peregrine Falcons, owls are masters of the silent flight. The other bird species have more aerodynamic wings, which enable them to dive at high speeds. The result of this flight strategy by the falcon is a considerable amount of noise. The only advantage they have is that they are often faster than their prey.

Even as the owl lays claim to being the quietest animal, there are variations depending on how nocturnal a species is. The more nocturnal an owl, the more silent it is in flight. That’s why the Great Grey Owl and Barn Owl are the most silent.

Most of the reason flying silently is beneficial to owls is because they’re nocturnal. At night, animals identify predators by sound rather than sight so flying silently negates the primary way their prey identifies danger.

During the day, though, it doesn’t matter as much how quiet a falcon is since its prey can just see it coming regardless. Diurnal/crepuscular owls rely less on silent flight for the same reason. So diurnal predators have developed other advantages over their prey (like being super), quiet flight is primarily an advantage for nocturnal predators.

Owls prey mostly on grounded targets by swooping down on them and killing them with their talons, so having the element of surprise (by being quiet) is hugely advantageous. Peregrine Falcons on the other hand prey almost exclusively on other birds and are entirely built around speed, catching prey by simply running them down. It doesn’t really matter how quiet you are when you can run your prey down whether they know you’re there or not.

It’s also interesting to note that the method by which Peregrine Falcons kill their prey is also predicated on their speed; instead of killing their prey with their talons/beak they actually just bludgeon their prey with a clenched foot upon impact. Since they dive at over 200 MPH, they hit their prey with so much force that the blow from their clenched foot often kills their prey outright, or at least stuns it, and then they catch the stunned/dead bird out of the air.

Many have garnered great respect for Owls. They are amazing creators. 270 degree head rotation, eyes that can zoom in like crazy, owls even have night vision. Everything in their anatomy is complete perfection. They only have one weakness. When it rains, their feathers become wet, and they cannot fly at all, making them really vulnerable. Despite that, I think of them as the perfect predator

The Most Beautiful Animals of the World