What to do about Dog Fights?

November 15, 2017 smallanimalplanet Cats And Dogs
Dog fights are frightening.  Worse, trying to figure out what started the fight in the first place can be confusing. That’s because there are many different reasons why dogs fight. We’ll talk about what can be done about dog fights.

Difference Between a Dog Fight and a Dog Scuffle

The first thing to determine is what constitutes a fight.  Dogs may scuffle and argue while establishing hierarchy, teaching a younger dog the rules of behavior, curbing over enthusiastic play or just testing the boundaries of an established relationship (such as a young dog testing the authority of the top dog as it ages).

Scuffles may be loud but they are usually short in duration and don’t cause any injuries.  However, the one thing that can make a scuffle turn south is an interfering human.  Sometimes the best thing we can do is to let our dogs settle the small stuff themselves. Learn to stand back and watch for some moments before interfering.

Fights are a different story altogether. Fights can be bloody and cause injury to both animals involved. Fights are just bad news.

What Sets Off Aggressive Behavior in Dogs?

How to Prevent Aggressive Dog Behavior that Leads to Fights

the owner.  Learn to recognize the signs of aggressive behavior and body language.

How to Prevent Dog Fights

What to Do If a Dog Fight is Already Happening 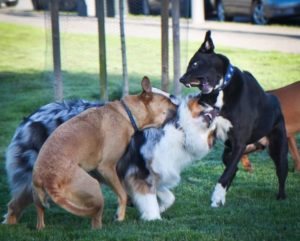