Why the Housefly is the Most Agile Animal on the Planet

Did you know that the simple housefly is the most agile animal on the planet? A housefly is a tiny black insect with large red eyes, gossamer wings, and a plump body. The minuscule nature of this insect makes its weight as negligible as its length and height. It beats other animals, especially insects, by far. And it’s all for good reasons. The first has to do with the way it flies. The second is concerning its reaction speed.

It has taken researchers a long time to discover the flying technique employed by houseflies and they have finally cracked it. Flies use a force known as delayed stall to create a lift with the up and down motions of the wings. This is aided by two other forces created after each half-stroke and when the direction of the wing changes. These forces have been described as ‘rotational circulation’ and ‘wake capture’, respectively.

For houseflies, ‘delayed stall’ seems to be the primary lifting mechanism. The fly sweeps its wings forward at a high attack angle and cuts through the air at an angle steeper than that of an airplane wing. For a fixed-wing aircraft, it will stall or lose flight at this high 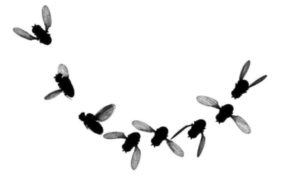 However, it’s the fly’s ability to fly in multiple axes with numerous degrees of freedom that make it the most agile animal. Flies have the ability to turn instantly, accelerate to maximum speed in an instant, and come to a complete stop with ease.

The reaction time of the housefly is one of the fastest known among animals. Conservative estimates put this at just about 1/12th of the human reaction time. You only have to imagine 1 second seeming something like 12 seconds. Because of its fast reaction time, a housefly has the ability to avoid even the most unusual or magical attacks with great agility. The housefly has the ability to reflexively dodge a fatal blow no matter how fast it is. Try to strike it with your hand and they will see it, predict a flight path, and escape before you realize you missed. This makes the fly the most agile animal on the planet.

A housefly is known to react to danger even before her senses allows her to do it. This insect is so dexterous that you cannot get it even when you get it flat-footed. It doesn’t really matter if you make yourself invisible as you strike it. The only way a housefly would lose its dexterity is when you immobilize it.

If you are looking for the most agile animal on earth, look no further than the humble housefly. It’s an insect from whom engineers have much to learn.

The Most Beautiful Animals in the World

The Quietest Animal in the World